The Importance of True Bioavailability

How do Nutrients Enter the Bloodstream?

The process of uptake from the digestive system varies greatly from nutrient to nutrient. Vitamin C is absorbed almost exclusively in the small intestine and requires the presence of transport proteins. For vitamin C, these transport proteins are called sodium-dependent vitamin C co-transporters (SVCTs). A lack of these proteins produces a corresponding lack of vitamin C uptake. Published research confirms that SVCTs (transport proteins) tightly regulate vitamin C absorption.

In one study with non-liposome-encapsulated vitamin C, 19 mg of a 20 mg oral dose entered the bloodstream. As the dose size increased beyond 30 mg, the blood level of vitamin C decreased drastically. They reported that a dose of 12,000 mg produced a maximum absorption of 16% into the bloodstream – That’s less than 2,000 mg! 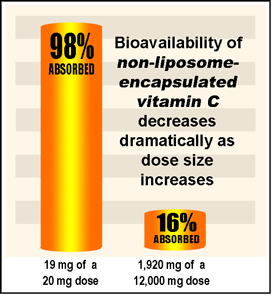 This chart represents one of the more optimistic views of vitamin C bioavailability. A National Institutes of Health study suggests that only 200 mg of a single dose, regardless of size, actually gets into the bloodstream. Bioavailability, is only half of the picture, however. The nutrient must also be able to pass into individual cells. 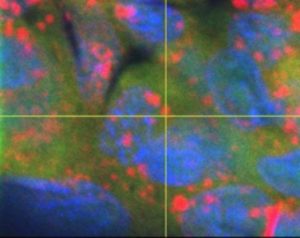 What’s the Best Way to Deliver Nutrients Into The Cells?

Once vitamin C enters the bloodstream, an active transport process is needed for the nutrient to move across any cellular membrane. This process can be just as restrictive as the one that initially limited the nutrient’s entrance into the bloodstream. Much of the vitamin C that is not actively transported into the cells will be filtered out by the kidneys and passed in the urine.

Liposome encapsulation overcomes the absorption barriers and cellular uptake restrictions because liposomes do not rely on SVCTs or any other carrier transport system. Instead, due to their size and composition, they are able to passively absorb through the intestinal wall and through cellular membranes. As a result, liposome-encapsulated nutrients (like Lypo-Spheric™ Vitamin C) achieve maximum bioavailability in the cells, where they are needed most.